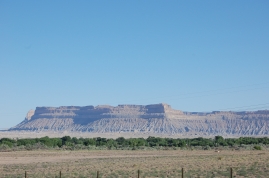 We drove past mesas… 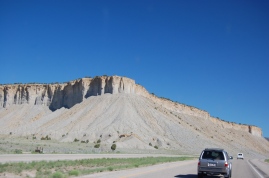 Lots to look at… 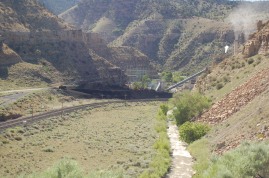 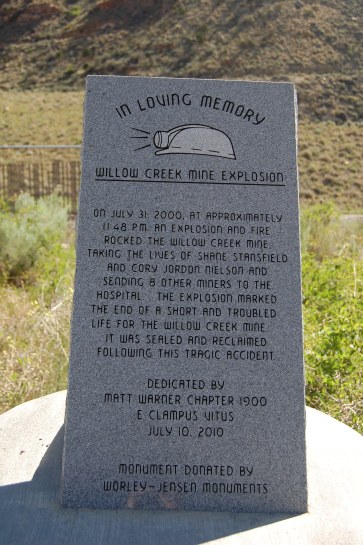 Memorial to Willow Creek Mine Explosion and Fire 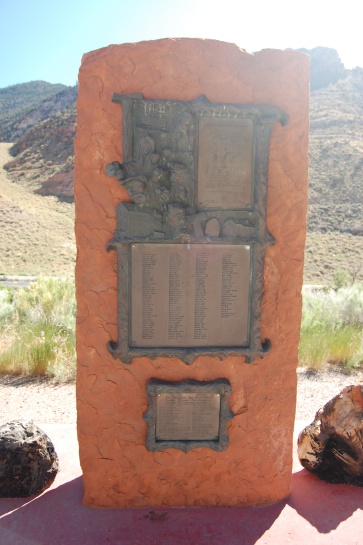 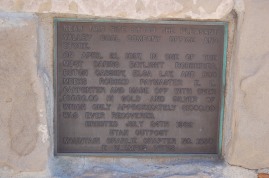 Commemorating robbery in 1897 by Butch Cassidy…

snow capped mountains in the distance 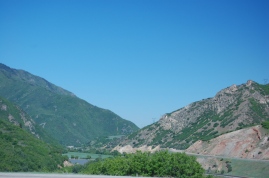 things are getting green again… 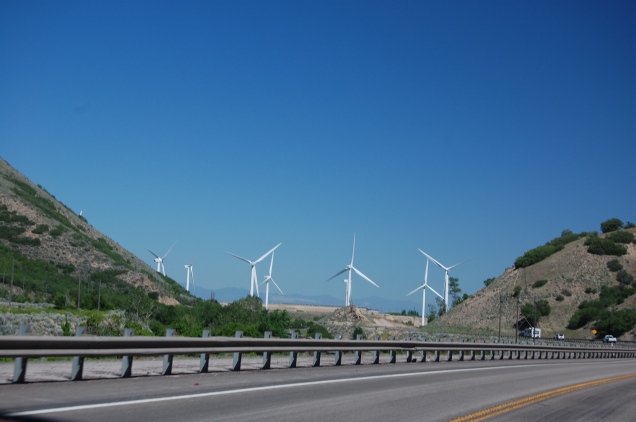 As we drove away from Green River, the truck windshield was plastered with splatted insects… We stopped in a rest area by the Castle Gate Mine and the Carbon County Coal plant to clean the windshield so I could take pictures while we traveled.

A little history… The rest stop had 2 memorials to mine explosions: the Willow Creek Mine in 2000, and the Castle Gate mine in 1924, in which a series of 3 separate explosions killed all 171 men in the mine. The explosions were determined to have been caused by a failure to properly dampen coal dust in the mine during the previous shift. At this rest stop we could also see a very large coal plant, which was opened in 1880 in Castle Gate, Utah. The mine produced high quality coal for the steam trains.

The town of Castle Gate is most famous for two historic events. On April 21, 1897, Butch Cassidy and Elzy Lay held up an employee of the Pleasant Valley Coal Company in a daylight robbery at the busy railroad station in Castle Gate, making off with $7,000 in gold. And, on March 8, 1924, the Utah Fuel Company’s Castle Gate Mine #2 exploded, killing 172 miners. It was the third-deadliest disaster in the history of coal mining in the United States at that time, and remains the tenth deadliest at present.

Two weeks prior to the explosion, the Utah Fuel Company had laid off many of the unmarried miners and miners without dependents during a period of reduced orders for coal. As a result, 114 of the men who were killed in the disaster were married men, leaving behind 415 widows and fatherless children. The death benefits from the Utah State Workmen’s Compensation Fund, established in 1917, provided $5,000 per dependent, paid out in $16 per week for six years.

The low point of our trip so far occurred late this afternoon: my Nikon D40 camera just died. I researched digital Cameras over a few days and Amazon will deliver a Canon PowerShot G15 on Monday (something smaller and lighter for my hands but oh, how I will miss the DSLR!)

I am retired, enjoying being a grandmother, traveling to National Parks and other interesting places in our RV with my husband of 43 years, and visiting with friends and family. Hobbies: photography, learning about wildflowers and birds, and trees, and reading from my kindle.
View all posts by Holly Ritger →
This entry was posted in Uncategorized. Bookmark the permalink.

1 Response to Day 9: Desert, Mine Explosions, and Coal Mining…

jammin' on down the road

travels and life through pictures and words

Wandering around Georgia and beyond